Turner Brothers Asbestos Site in Rochdale Continues to Cause Concern for Residents. 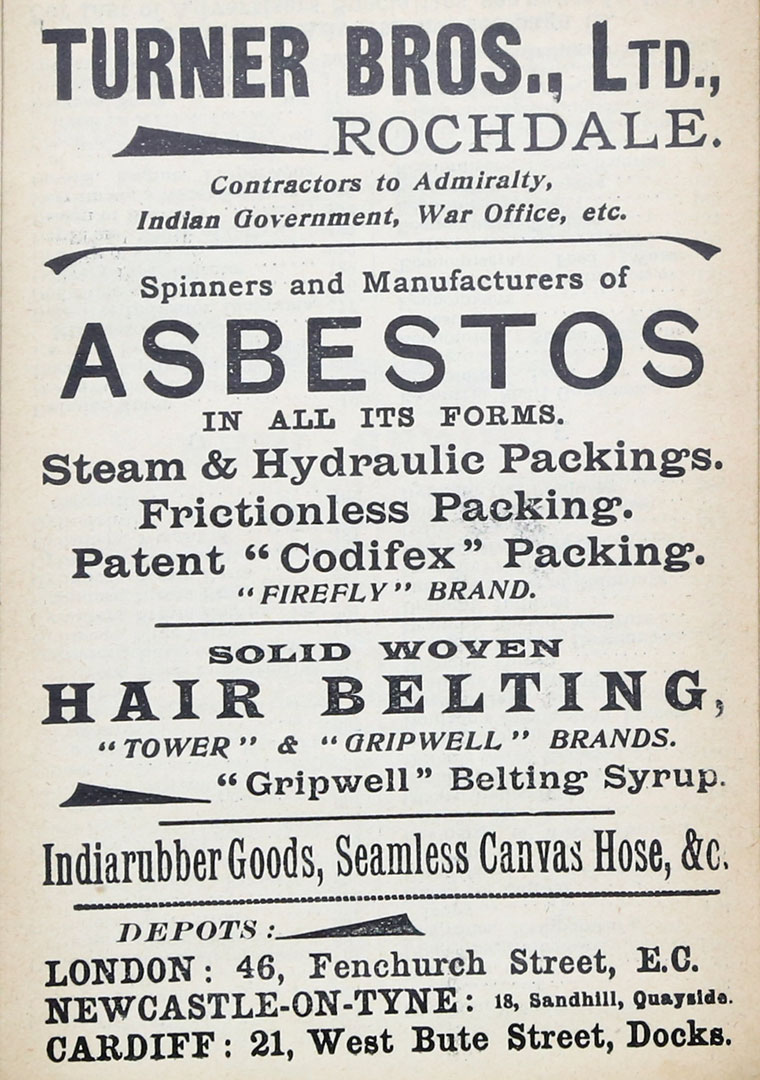 Even though the site at Rochdale has long since been closed and the manufacture of any asbestos containing products stopped in the 1990’s, the legacy of the Turner Brothers Asbestos factory in Rochdale continues to cause fear for residents who worry about the amount of asbestos left on site and in the surrounding area from the many years of production.

In 1924, Nellie Kershaw was recognised to have died from an asbestos related condition as a result of exposure to asbestos at Turner Brothers Asbestos at Rochdale. She was just 33.

During production in the 20th Century, asbestos was allowed to enter the atmosphere around the factory by way of extractor fans which extracted dust from the factory floor. Further the factory produced tonnes of asbestos waste each week which had to be disposed of.

Those who lived near the Turner’s factory in the 1950s, 1960s and 1970s can recall a coating of dust on cars, pavements and in the woods surrounding the factory. This was asbestos dust which had escaped from the factory.

It is the remains of this industry which worries residents today. Asbestos having been buried on site and having been allowed to contaminate the area surrounding the factory could, they fear, potentially expose current and future residents and visitors to asbestos.

The Turner Brothers Asbestos Factory was initially sold in 2004 with the new owners intending to redevelop the site and create an urban village of 600 houses and a children’s nursery. There was strong opposition from local residents when planning was applied for including from the campaigning group Save Spodden Valley.

This lead to tests being carried out in 2005 revealed the site was contaminated with asbestos.

Roots of trees were found to have asbestos fibres surrounding them.

Over the past 10 years there have been further concerns will illegal dumping of waste on the site, thefts from the site and 2 significant fires. Further tests were carried out around the perimeter of the site on an almost monthly basis between August 2015 and March 2017. The results of the tests revealed one amphibole asbestos fibre. This is either a blue or brown asbestos fibre.

The conclusion of the testing has led the Council to announce that no evidence of any significant risk to health had been found.

“The results from the independent monitoring of airborne asbestos fibres at the site have been reviewed and we did not find any evidence of any significant risk to the health of those residing in areas surrounding the site. The report has been shared with Public Health England (PHE) who fully support these findings.”

Those campaigning about possible asbestos contamination were not satisfied with the results.

"This is a remarkable result. The way the test findings have been interpreted and communicated to the public could create the breath-taking conclusion that the former site of the world's largest textile factory may have the cleanest air on the planet.

Hilda Palmer in response to the survey pointed out that “"Context and interpretation is important. At first glance, all these results currently suggest is that when the site is not being disturbed there may be small risk from air borne asbestos. Currently, these results tell us nothing about what is in the soil surface or what is buried there and tells us little about the risk of air borne asbestos exposure on and offsite when the soil surface is disturbed, especially if large scale industrial earth excavations are carried out.”

The results of the geophysical land survey carried out in late 2016/ early 2017 are still awaited by residents despite the survey having been completed almost a year ago.

Whilst manufacturing at the Rochdale site may long have long since ceased, its asbestos legacy continues with people still developing asbestos related conditions including mesothelioma from either working in TBA’s factory in the past, from living with someone who worked there or from living close to the factory.

Unfortunately those people are now never fully compensated for the condition, Turner’s, having gone into administration in 2001, set up a scheme to compensate those who develop asbestos-related conditions. The T & N Asbestos Trustee Company Ltd, the name of the scheme, has a limited pot of money which has to be used to compensate all those who develop asbestos-related conditions as a result of Turner’s activities going forwards into the decades ahead.

Helen Wilson, Partner at The Asbestos Law Partnership commented “Turner Brothers Asbestos at Rochdale is just one of many sites where asbestos was manufactured in this country throughout the 20th Century. It is important that before anything is done to the site at Rochdale full investigations are carried out to ensure no-one is needlessly exposed to asbestos from this site in the future. Having acted for numerous clients who worked or lived near the factory in the past, I have seen first-hand the devastating affects the factory has had on asbestos sufferers and their families.”